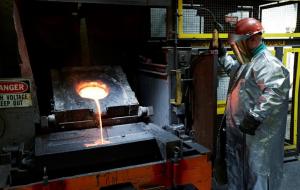 Rochester Silver Works – building a future on silver (From Kitco.com)

Silver – once associated with photography and written off by many with the advent of digital cameras has seen a comeback lately. A few weeks ago, TMI reported on The Silver Institute’s outlook on current developments and future applications, of which there are many. Not only does silver have a steady market in jewelry, it is also irreplaceable in some catalytic processes such as ethylene oxide catalyst, and it is carving its niche as gold’s more affordable substitute of sufficient technical qualities in a lot of applications.

This is the environment into which Rochester Silver Works, LLC (RSW) was launched in 2011. Reborn from the film ashes formerly known as the Eastman Kodak Company, RSW set out to claim its place in the world market. TMI spoke with Chip Milligan, sales & marketing director of Rochester Silver Works, to learn more about the company’s plans and objectives.

“RSW was acquired by the owner of Technic Inc”, one of the world’s leading manufacturers of electronic materials, explains Milligan. “Technic had been a customer of Eastman Kodak for many years and relied on its ‘best in class’ silver compounds for their own production”.

Not only did the new owner keep all of the former Kodak employees on board. He also gave the business – and silver – a chance to reinvent itself within the changing markets.

“Recycling, refining and chemical manufacturing are the three pillars of our operation”, said Milligan. Volume losses in traditional business areas are increasingly compensated by growth into new applications and territories. “We just redesigned our website to show how massive our operation really is”, he added. “Our plant is built for capacity, which is why we increasingly enter markets for silver chemicals, film recycling and silver refining streams both in and out of country”.

The company’s claim to fame is their high quality silver nitrate. “Twenty to forty years of employee experience is the norm at RSW”, Milligan said. A high consistency in quality eliminates customers’ need for ongoing production corrections and adjustments in upstream processes.

While there are others in the silver market, of course, the relaunch of Eastman Kodak’s operations as Rochester Silverworks is a manifestation of the confidence relevant market participants have in the future of the precious metal.